The antioxidant market: Cocoa
onhub
mayo 12, 2017
12:00 am
Researching on the exclusive list of foods called "Power foods", we have found cocoa. So is. Eating chocolate can even help you lose weight. As you read it. Its consumption in its purest form, is a very powerful antioxidant . That means regenerates your cells and prevents cancer. Also, it contains anandamide that works as […]

Researching on the exclusive list of foods called "Power foods", we have found cocoa. So is. Eating chocolate can even help you lose weight. As you read it. Its consumption in its purest form, is a very powerful antioxidant . That means regenerates your cells and prevents cancer. Also, it contains anandamide that works as a natural mood regulator. Not in vain is it said that a chocolate is the best medicine for sadness.

Cocoa in the world For these reasons, cocoa became very popular. Its so sweet shape and its properties have managed to obtain today a world production of 4.5 million tons by 2016. 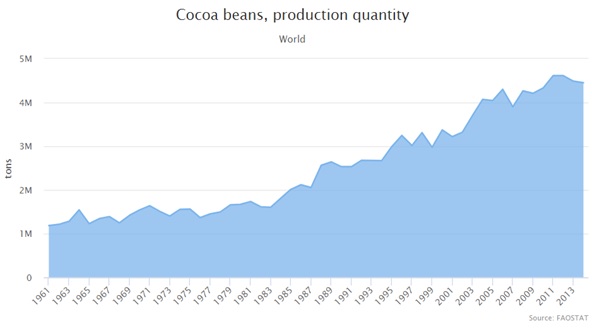 According to ICCO (International Cocoa Organization), this is 14.8% more than last year. 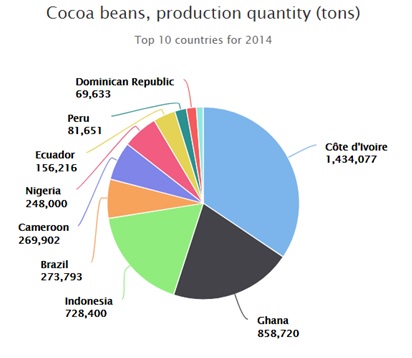 Ivory Coast, is ethe main producer of cocoa worldwide, It reduced the price paid to cocoa farmers by 36%, which generated a protest. This weakened confidence in the economy. Warren Patterson, strategist at ING Groep in Amsterdam, says that when cocoa is accumulated in ports, it does not provide income to farmers or the State. The government could no longer afford to keep a high price and decides to lower it.

The fall of 41% registered by cocoa in the last 12 months, makes this the worst performance among < 34 basic products tracked by Bloomberg. 10 years ago , April 2007 we managed the same price of cocoa. The difference is that at that time it was growing and now we are still in decline.

The fall in prices is how the markets fall and bring the problems. When a country wants to export, in this case cocoa, independent of the current problem of commodity prices, it must be competitive in the market. Which means that prices must be lowered so as not to lose production

Cocoa exports from Mexico Mexico is not one of the main exporters of cocoa, as we have already seen, but it is testing the market: 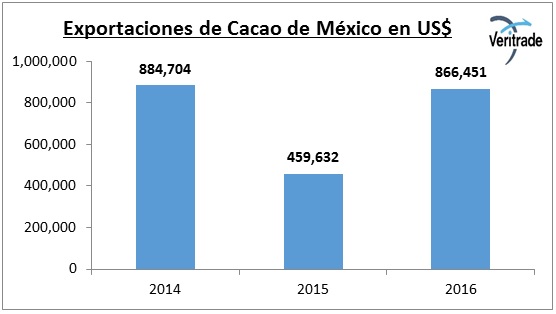 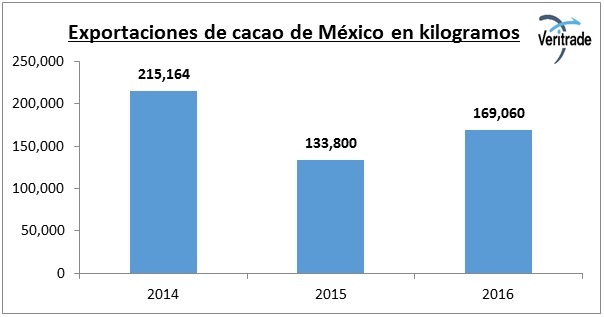 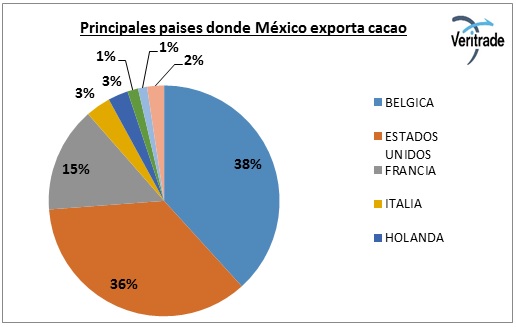 The most interesting countries to export for Mexicans are Belgium, with 38%, and the United States with 36%.

We do not want to be a party pooper, but the question that many must be asking is what will happen with the production of 2017? How will Mexico be impacted by the fall in the price of cocoa in the market? Finally, what can be done to counter this?

If the sale as an input means a loss by lowering prices to be competitive, the way is to provide a percentage of the production for local consumption. Production does not become so high as to have an oversupply locally in Mexico, so it would not break the local market.

Other options are to generate new cells, be the antioxidants of the market, encourage differentiation, create delicious varieties for every palate, opt for unique flavors, give them a nice package that say "take me" and export them as the best chocolates that exist in North America. Well, that's what Belgium does, after all. Import them from different countries, process them and sell them as if these chocolates were theirs, considered the most exquisite in the world. It will be a long-term bet without a doubt, since Belgium has earned a reputation over several years of work.

Everything will depend if Mexico's production costs, rents, labor, seasonal problems, transportation prices and other variables, are low enough to still combat this cancer and give them tools to generate good humor for people. Find out how the foreign trade market moves and how you can be benefited. Achieve your goals and get informed through Veritrade.
Request a free trial by entering: http://bit.ly/2sSRd5Q

Category : en
Previous¿Cómo le sacamos el jugo a los cítricos peruanos?
NextThe struggle for the origin of the Pisco and the Global preference.