¿How has copper exports moved from Chile in recent years?.
onhub
noviembre 3, 2016
12:00 am
In the world of metals, we see that the market has been resentful. The mining companies are cutting their expenses, the banks are not financing investment projects and in a very limited way, there are mining companies that are doing expansion projects What happened to the good times? We see that after the rise of […]

In the world of metals, we see that the market has been resentful. The mining companies are cutting their expenses, the banks are not financing investment projects and in a very limited way, there are mining companies that are doing expansion projects

What happened to the good times?

We see that after the rise of 2006, prices have only remained and in the last year they have fallen by 20%. The people who invested in copper, for what reasons did they do it?

You always have to buy when prices are low and see the impact of growth on investment. When will this be?

Both Goldman Sachs Group and Barclays , large financial firms, have defined that due to the oversupply caused by supplying the Chinese market, this situation does not seem to recover in the short term. Chileans live on copper, where their income represents almost half of exports. Chile extracted 20 MM pounds in 2014 and 2015, one third of the world production, and more than triple that of the second supplier, China. The most important copper mines in the world are in Chile.

How to face this fall?

We already know that the factors that move the economy are: the price of oil, how the Chinese industry performs and the price of the dollar. The price of copper dropped 8% in 2013, 6% in 2014 and 20% in 2015. This last fall and the expectations of this year is what has alarmed us.

The Copper futures market gives us some insight that the price of copper is going back. There seems to be contrasts towards the rise. Prices passed the bearish trend line. The pattern of rising peaks was formed several times. The market seems that it will go towards the nearest high level at the level of the blue horizontal line. 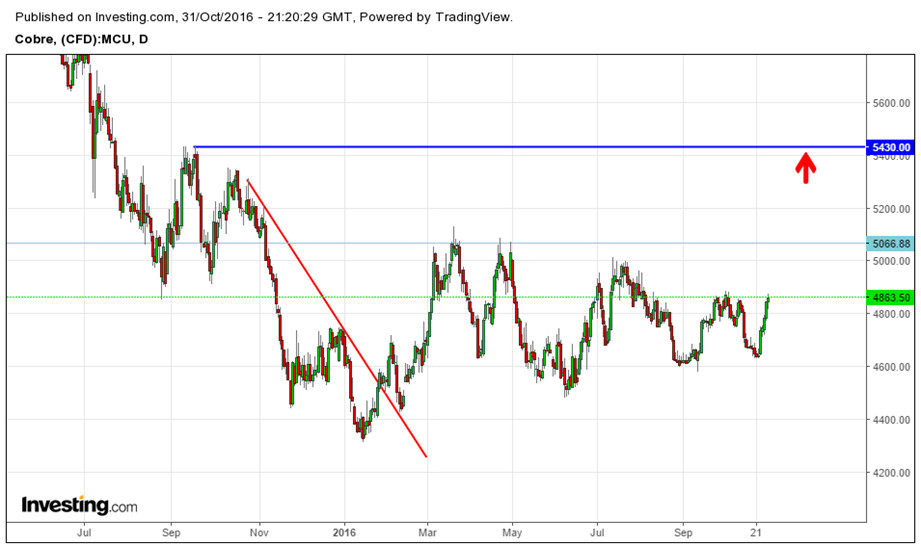 The copper inventory are the differences that are generated between supply and demand. If there is a lot of copper in the market, the price will go down. China maintains a strategic inventory to meet its demand. According to the interview to Richard Wilson , woodmasons of Wood Mackenzie this level of inventory can be speculative to not generate instability in the stock market. When the economy stabilizes again, the prices of metals will begin to rise. Any macroeconomic announcement will be enough to trigger the price up.

Chile will not stop being the largest producer of copper worldwide and with a good cost structure and reducing expenses, they will be able to cope with the fall in prices. We can expect good macroeconomic indicators to trigger demand expectations and start producing more, but a less risky decision would be to reduce production, to put pressure on the market and raise the price of that metal. 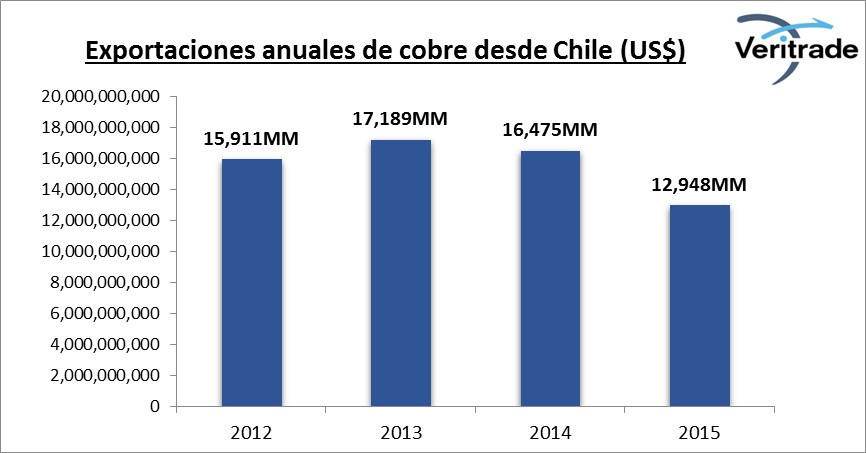 In terms of price, we are not going to obtain the same results as we did years ago. From 2012 to 2013, we grew by 8%. It was after the decrease began, falling 4% in 2014 and 21% in 2015. In efficiency issues, in 2012 we achieved a price of $ 0.96 per pound exported, and in 2015 we obtained $ 0.63 per pound. The impact of prices has affected us by $ 6.6 MM, if we use the prices per kilo obtained in 2012. By reducing copper exports we could achieve a better efficiency, exerting pressure from the price increase. Being the main producer of copper worldwide, we can give ourselves that luxury.

The main countries that require Chilean copper are China in 32% and Japan in 28%. Big industries that really move the needle. To build a house, approximately 200 kilos of copper is required, double what was formerly used to build. The industry of the eastern countries, whether for domestic consumption or to develop construction material for export, are those that set the pace of the price of metals.

Learn more about Veritrade, and the foreign trade data that you could obtain, to analyze the data and plan for new business opportunities.
Login to http://bit.ly/2i6hE7g and request your free trial.

Category : en
Previous¿Qué País ganará el partido de comercio exterior? ¿Perú o Argentina?
Next¿How will the exports of Colombia to the USA influence the arrival of Trump to the presidency?.