¿Which country will win the foreign trade party? ¿Peru or Argentina?.
onhub
octubre 5, 2016
12:00 am
We are on the eve of the Peru - Argentina match. Leo Messi does not play in this game because he has been injured and is resting for a month. The Peruvians may think they have an opportunity since he is the best player and scorer for several years, this time he will not be […]

We are on the eve of the Peru - Argentina match. Leo Messi does not play in this game because he has been injured and is resting for a month. The Peruvians may think they have an opportunity since he is the best player and scorer for several years, this time he will not be able to score a goal. What some do not know is that the historical team plays strategically as a team, setting up the passes and movements for the shots on goal and looking to reinforce in defense.

In the Argentine team we have Agüero, Higuain and Dybala as the main scorers and in the Peruvian team we have Guerrero, Ruidiaz and Flores.

The statistics tell us that the triumph will be of the visitor, but there is always room for expectation, hope and confidence that the team has prepared for this great game.

Following the statistics of past years we can see how the performance of both countries has been in terms of foreign trade.

If the scorers of this game would be the products that they export, the main scorers that Argentina exports to Peru would be the "Soybean oil in the rough" that represents 21%, $ 115M and "Biodiesel and its mixtures" that represents 19%, $ 90M. But this was not always so. As Messi is injured, the country bet on the export of "hard yellow corn" which in 2013 represented 25% of all exports made to Peru, which generated $ 388M and in the last 3 years has fallen in average -59% from year to year, achieving in 2015 only $ 65M.

The player who started from his beginnings being insignificant, has started to be very promising. We are talking about "Raw sunflower oil" which, in the last 3 years, has grown by 117%, creating a market of $ 17M in 2015. This player must be kept in the spotlight that seems to steal the ball from the match. 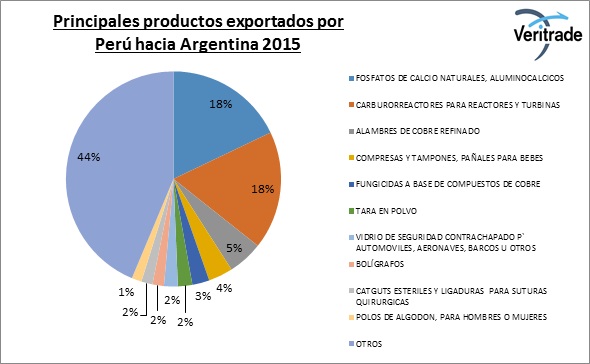 In the case of Peru, the main scorers are "Natural Calcium Phosphates, aluminocalcics" with 18% and "Carburreareactores for reactors and turbines" with 18%, both bringing $ 23M. Although the "Jet and Reactor Jet Engines" is sharing the first place, last year it had a big injury and fell -40% its exports to Argentina, exporting $ 23M when it has exported $ 40M. One of the players that has is that it has opportunities are the "Fungicides based on copper compounds" that in 2015 exported to Argentina $ 3M growing by 171% compared to 2014.

We can say that in this world there are so many factors that the most important thing is to do coordinated work with each market for good global performance. In the end, it's all about working as a team when one player is injured, there is another who comes out to give the goal that provides the expectation, hope and confidence that the country needs to continue playing as a team.

Learn more about Veritrade, and the foreign trade data you could get, to analyze the data and project you for new business opportunities.

Login to http://bit.ly/2j9X7eC and request your free trial.