¿Will Pokémon Go Fever Influence Mobile Imports in Peru?.
onhub
septiembre 15, 2016
12:00 am
After lunch, in the office, I heard this phrase: "Are we going to walk?". I really thought it was curious that people went out to walk voluntarily after lunch, in my opinion as to "lower the food". But was this the true objective? It was not that. If you saw people on the streets staring […]

After lunch, in the office, I heard this phrase: "Are we going to walk?". I really thought it was curious that people went out to walk voluntarily after lunch, in my opinion as to "lower the food". But was this the true objective? It was not that. If you saw people on the streets staring at the cell phone, it was because they were playing Pokémon Go. Catching pokemon is what has caused a sensation in the last month and a half both in Peru and around the world.

We've seen everything from the prince who enters a lagoon to take his maid's cell phone to the police who seem to catch a suspect at 3 a.m., all he did was look for Pikachu.

But what is the business behind this game? For now Niantic , the developer of the application, allows the download of the game for free. However, you can buy some tools in the Poképaradas, such as Modules Bait, Incense, Pokeballs among others. But is this the main income?

A study conducted by GFK concludes that only 7% of respondents (sample: 1,541,192 people) plays Pokémon GO and are mostly men between 18 and 24 years old, from Lima and socioeconomic level C. Our research reveals that 77% of Pokémon teachers, from socioeconomic levels D and E, would not invest in acquiring the aforementioned tools and 33% of socioeconomic level A and B would.

So, what is behind the Pokémon fever?

The main business of this game is in the consumption of data for mobile companies and in the purchase of cell phones with enough technology to be able to play.

The investigation of NetQuest , recently presented at the IIeX organized by APEIM and ANDA , says that Peruvians are, like our Latin American neighbors, the users who play Pokémon Go the most. Niantic has the great challenge of developing new game updates so that it has continuity and does not lose its validity as Candy Crush or Farm Ville .

Taking this into account we saw that on September 7, Apple announced the launch of its new cell phone, the iPhone 7. It was undoubtedly a great revelation, but what caught my attention was the presentation of Apple Watch with the application adapted to play Pokémon Go. The company founded by Steve Jobs has always focused its strategy not on the device, but on the concept that everything must be adapted to solve a real consumer problem. The brand of the bitten apple has achieved this goal with its iPod and then with its Smartphone. We see that with the Apple watch with the application of Pokemon Go is trying again to achieve the same.

Another important issue is the problem caused by the game with its high battery consumption since you need to be connected to the internet and GPS. Apple was able to respond to this need because the Apple watch alerts you when you have a Pokémon close to walking without having to turn on the cell phone screen.

Will Apple stay here? For it is projected that the next step for them are the lenses that modify our current world. Without a doubt, it's something you've already heard, the augmented reality. This refers to real-world experimentation with digital elements that "increase reality ", technology that is the basis of the Pokemon GO application. 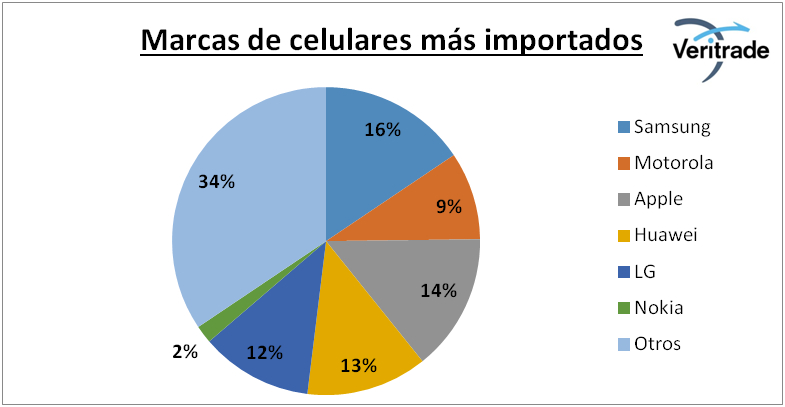 The most imported cell phone brands in 2015 were: Samsung with 16%, Apple with 14%, Huawei with 13% and LG with 12%. It not only influences cellular materials, operating system technology and its price strategy. It also influences the applications that are possible to use in the device.

We know then that the market is fragmented between Samsung, Apple, Huawei and LG. We will see then who goes beyond technology and adapts to what augmented reality demands, to gamification in the real world, and gives the first indications of overcoming the "Stone Age" in which we are currently, as he said Zuckerberg. Which company will be the one that shows us the first steps of the fourth industrial revolution?

Learn more about Veritrade, and the foreign trade data that you could obtain, to analyze the data and plan for new business opportunities.
Login to http://bit.ly/2iaCyQS and request your free trial.