Color and speed – Import of luxury cars in Peru
onhub
enero 20, 2016
12:00 am
Years ago, it was not very common to see luxury cars on our streets. Now, with a more solid economy and an increasingly heterogeneous upper class, the streets of Lima are more and more like the streets of large cities in terms of their variety of luxury vehicles. In the second half of last year, […]

Years ago, it was not very common to see luxury cars on our streets. Now, with a more solid economy and an increasingly heterogeneous upper class, the streets of Lima are more and more like the streets of large cities in terms of their variety of luxury vehicles. In the second half of last year, there was an increase in the demand for brands such as Mercedes Benz, Audi, Lexus and BMW, which are the most representative firms in the sector, since they have a higher number of sales. What numbers sustain these affirmations? We'll tell you then: 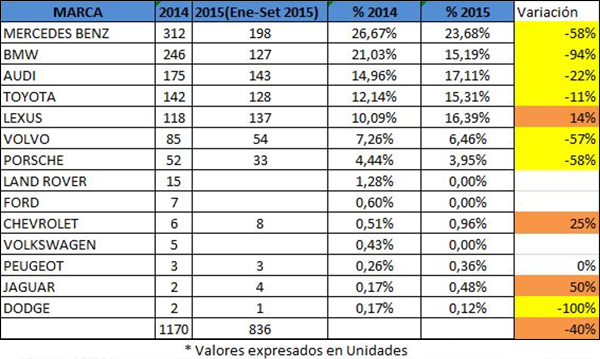 2014 was a great year in sales, and well know Mercedez Benz and BMW, who sold 312 and 246 units respectively. However, this boom was stagnant that year, since for 2015 they had a steep fall of 58% and 94%. But they were not the only affected brands, Audi suffered a drop of 22% while Porsche one of 58% despite the few sales it had a year earlier.

This fall is due to the substantial increase in sales for economic vehicles, such as Hyundai, Kia, Chevrolet, etc. The mid-range brands were also not behind, as they launched cars at reasonable prices like Mazda with the new Mazda 2 or Citroen with its model C-Elysée. While these are not direct competitors of high-end cars, it is safe to assume that in the face of a slowdown in the economy, the first thing to be sacrificed is luxury goods. Especially when the mid-range offers a high-value replacement at a more affordable price. 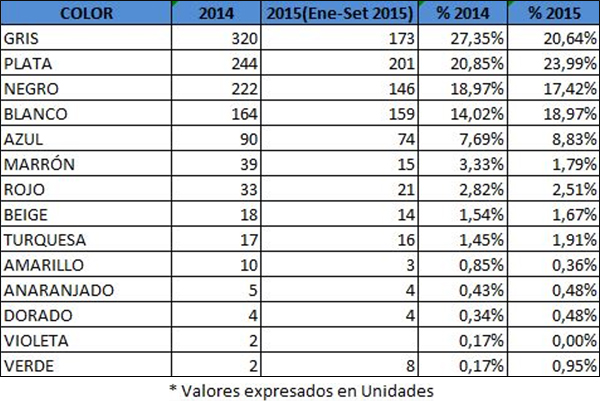 Acquiring a car in these times has become simple, either by the offers given by dealerships or some other reason, but, how do we choose the right color? Here we show you the best selling colors in the last two years: 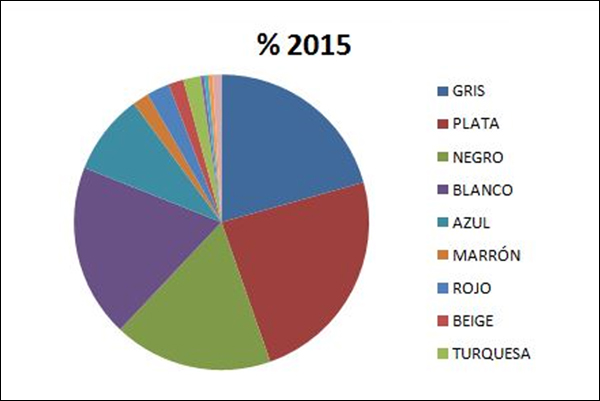 Clearly we can see that the three most acquired colors are silver, gray and black. Why? Each color has its own meaning, which is why our personality automatically chooses them:

Silver: This color represents solemnity, money and luxury. A tone mostly chosen by users with extravagant personality. It is no coincidence, therefore, that it is one of the favorites for luxury car buyers.

Gray: It is the mixture of white and black, it symbolizes melancholy, doubt and lacks energy. However, despite its definition, for the public that chooses such a color, it does so because it represents a certain elegance and avant-garde.

Black: A strong color, associated with mystery, elegance and even sensuality. If the tonality is matt then it will have a more negative representation, associated with emptiness, loneliness or sadness. If it is bright, it is associated with a look full of panache and luxury.

Red: While not one of the favorites, this is an iconic color for luxury cars (especially Ferrari cars). Also, did you know that securing a red car in the US costs more than securing the same model in another color? Apparently, this is one of the colors most prone to crash. Amazing!

And what color would you choose for your luxury car? If you still can not afford it, we invite you to try Veritrade for free, it will take you so far in your business, that your luxury car will be only one step away!