Mixed Ceviche: The Import and Export of Fish and Seafood in Peru
onhub
diciembre 7, 2015
12:00 am
Being fish and seafood the main ingredients of our flag dish; the ceviche, the import and export of these products is a subject of interest for all. Both its import, as well as the export, had an abrupt drop in the last two years. Why? We analyze it below. Falling sales volume in the international […]

Being fish and seafood the main ingredients of our flag dish; the ceviche, the import and export of these products is a subject of interest for all. Both its import, as well as the export, had an abrupt drop in the last two years. Why? We analyze it below. 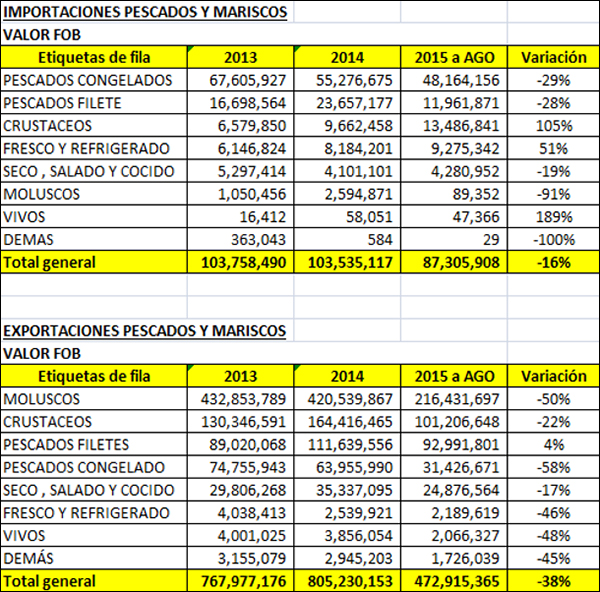 Speaking in a general framework, Peru is going through a serious fall in terms of the import and export of fish and shellfish. Compared to the year 2013, where a total of US $ was generated. 104 and US $. 768 respectively, this year decreased considerably in US $. 87 and US $. 473. If we speak in percentage figures, these are represented by a decrease of 16% and 38%, which for amounts as high as this means a strong deceleration in the industry.

One of the strongest drops in our export fishery products was in this category. The Peruvian crutáceos (say crabs, lobsters, prawns, shrimps and barnacles) are highly competitive worldwide, especially in prawns, Tumbes being the main national producer.

However, this last year has seen a significant drop due mainly to the fact that the US (our main shrimp buyer) has stock of the product left over. Why? Apparently, the year 2014 saw a unique growth in shrimp export, as our competitor countries suffered were affected by the Early Mortality Syndrome (EMS). Once recovered, they entered strongly in the first quarter of the year, saturating the European and American demand.

How has the import of tobacco changed in recent years?

This category includes octopus, squid and shellfish. This figure has been gradually devalued in the last two years, both for imports and exports.

The figures indicate that our country does not need to import molluscs, since we have wealth to spare. For this reason, the export of this product has always been an important industry. Squid and frozen squid from Peru are highly valued internationally. The international crisis, however, made felt the downward view this past year, despite a national campaign to diversify more export destinations.

Added to this, is the reduced demand from our main buyer (the Asian market) which ranks first in the ranking of buyers of domestic fishery products.

The fall is not only due to macroeconomic factors

This year El Niño attacks with everything. In the event that the phenomenon persists with an even greater magnitude, it is possible that the anchoveta (main input in exported fish canned fish) migrates to Chilean coasts, causing a reduction of 4.1% (23,700 MT) due to the low availability of fish. mentioned product, according to the consultant Maximixe. All this despite the fact that this year it was estimated that exports of canned hydro-biological resources registered a growth of 1.5% in value (US $ 93.5 million).

On the other hand, the decrease in the volume exported is also consistent with DS 001 - 2015, which allowed industrial fleets to fish from five nautical miles (when it was initially made after the seventh mile).

If you want to get ahead of the competition, and even the weather, the best way to do it is to stay informed.