In a previous publication, we mentioned the curious growth of the importation of potatoes into Peru. Why does our country, an iconic potato producer, import such large quantities of the tuber? Mainly, due to the incredible growth of the fast food industry in our country.

What does the data veritrade tell us? 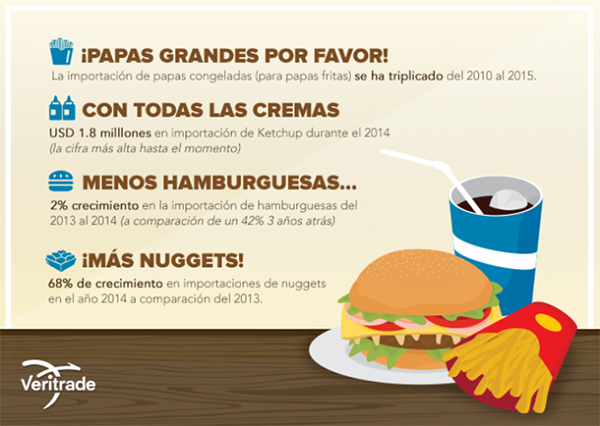 It is enough to share the latest results of a study conducted by Quality Research, which ensures that almost ¾ of the Lima population consumes fast food biweekly. As far as categories are concerned, chicken is the clear leader, positioned in the top of mind of consumers with brands such as KFC or Norky's. Recently, KFC made news when it opened its 100th location in Peru, consolidating itself as the favorite American fast food. It is no surprise, therefore, that one of the largest poultry in the country specializes in B2B (business to business). Avinka, being a supplier of chickens to giants such as McDonald's and KFC, recorded sales exceeding USD 80 million in 2014. Still, they claim that more than 50% of their sales come from their flagship product: the whole chicken for the preparation of our beloved chicken on the grill. It's a much more atomized market than KFC and McDonald's, but the numbers are strength.

Worldwide, the reality is different

The biggest fast food reference is undoubtedly McDonald's. With more than 35,000 stores worldwide, and after a substantial increase in sales during 2011 and 2012, the hamburger giant has suffered a fairly low closing of the year. Its fall in sales (and the value of its shares), is due in part to the income and growing popularity of the so-called Fast Casuals. These are distinguished from the Fast Food by using less processed or frozen inputs, and its biggest exponent in the US is the popular Chipotle Mexican Grill. This is not yet the norm at the local level, which is why so many foreign franchises are looking to enter the market; like Dennys, or in some cases re-enter the country; how Taco Bell plans to do it

Another optimistic figure comes from the increase of Peruvian franchises abroad (mainly within Latin America). It is estimated that this year there will be 50 Peruvian franchises abroad, of which 90% are related to gastronomy. The pioneer and leader in this topic, is also a worthy fast food: China Wok, which is positioned not as a Peruvian product, but as international food for an international market too. Even, despite not consuming cow meat, the Bembos franchise currently triumphs in India, based on chicken and mutton burgers with their respective Peruvian seasonings. The potential is infinite!